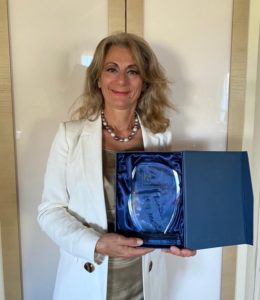 The winners of the first edition of the European Tech Women Awards promoted by the British Department for International Trade (DIT) were announced on 2 September, in virtual format at the opening of London Tech Week scheduled from 1 to 11 September. In Italy, the Department is based at the British Consulate General in Milan and at the British Embassy in Rome.

The 24 winners from 12 countries received the prestigious accolade for their groundbreaking technology projects carried out in the UK and Europe. The areas of expertise in which the winners have distinguished themselves range from mathematics, IT, Artificial Intelligence, new apps, Internet of Things, engineering and sustainability, to energy, telecommunications, legal tech, science, mobility, 3D technologies and specialized job placement.

The awards ceremony was also an opportunity to celebrate the diversity of the United Kingdom, the country’s openness to innovation and female leadership, with speeches by Anne-Marie Imafidon (child prodigy of mathematics, is co-founder of the United United of the social enterprise project STEMettes which, since 2013, has supported the approach to STEM disciplines – Science, Technology, Engineering and Mathematics – in favor of girls and girls aged 5 to 22), Sheila Flavell (Chief Operating Officer of FDM Group, an international professional services company based in London that since 1991 has been providing adequate training to graduates, people returning to the world of work, especially women, and ex-military personnel), Oriel Petry (Director of Technology and Advanced Manufacturing of the DIT of London) and Richard Burn, Her Majesty’s Commissioner for Europe, who commented on the essential presence of women in technology and officially launched Europe Technology Campaign.

Four of the winners are Italian: together with Graziella Pellegrini (co-founder and director of Research and Development of the university spin-off Holostem Advanced Therapies and coordinator of cell therapy at the Centre for Regenerative Medicine “Stefano Fearri” of the University of Modena and Reggio Emilia) Sabrina Malpede (Co-founder of the British ATC Blade Ltd and holder of the patent the new generation of ultra-light and modular wind turbines, built in composite material and covered with fabric), Elisabetta Romano (CEO of Sparkle) and Eva Ratti (co-founder of the start-up Find your Doctor, the first employment agency in Italy specializing in the placement and enhancement of PhDs outside the academic field).

“This award celebrates research and innovation as tools to shape the future and bring change in our lives, and it is through research and innovation that we want to defeat serious diseases – commented Graziella Pellegrini – I am honored as researcher and coordinator of many young researchers but also as a woman and as a mother of two beautiful young women, to receive this award and it is a real pleasure for me to be able to undertake new collaborations with British institutions to bring to patients the results of our research”.

“It is a great honor for Holostem that Graziella received this award which testifies to international recognition for the level of technological innovation of our biotech” – said Marco Dieci, CEO of the Italian company-. In a complex field such as that of regenerative medicine, the effective collaboration between academic research, by its very nature with a very high degree of innovation, and the solid know-how of industrial research and development is the only way to go to bring to patients new and advanced therapies. Graziella perfectly embodies both aspects, as the DIT highlighted by awarding her in the Academic and Research category”.